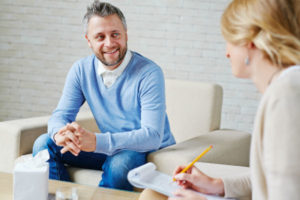 The differences between the two approaches can perhaps be best understood by considering an illustration. Behavioral therapy may be able to help an agoraphobic to get used to the feared situation by repeated exposure. However, it is also possible that the agoraphobic could be employing an undisclosed safety or coping strategy on which he is secretly relying. He might in fact have his belief in the effectiveness of this reinforced by exposure alone, that is believing that he can confront the agoraphobic situation better because his safety strategy is working so well.

Also, if panic control measures have been strongly taught as a part of behavioral therapy the patient may subsequently be able to enter the agoraphobic situation only because he now believes that he can avoid catastrophe by employing them. It is then likely that he will not have come to realize that panic symptoms are harmless as this belief is not challenged by control alone. His agoraphobia has been controlled rather than changed and panic control has become a safety or coping strategy in its own right.

In cognitive therapy, panic control would perhaps be viewed as one of several useful measures aimed at changing an agoraphobic’s belief in the harmfulness of panic symptoms. In practice, cognitive therapy experiments, such as those described above, have to incorporate exposure, which is a key element of behavioral therapy.

There is, in fact, a considerable degree of overlap between the two approaches. The behavioral approach to agoraphobia, based on exposure therapy, has been proved to be effective in most cases and has also been shown to bring about cognitive changes. Many experts believe that the effectiveness of purely cognitive treatments has not been established or is inferior to that of behavioral therapy. The same view also tends to be taken with regard to combined therapies which have been tried. However, both behavioral and cognitive approaches have been proved valuable in the treatment of panic disorder.

The fact that a high percentage of agoraphobics are helped by behavioral exposure therapy is especially encouraging when one considers that it is generally only the most severely affected patients who seek treatment. As mentioned above, it is thought that many agoraphobics (no doubt including those who see themselves as being less seriously affected) remain ‘hidden’ within the community and never seek professional help. Hence part of the function of a book such as this should be to stress the importance and effectiveness of treatment compared with suffering the distress of agoraphobia.