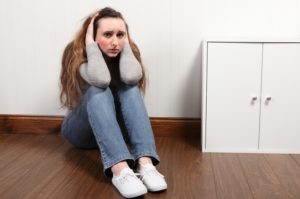 A panic attack involves the sudden appearance of four or more of the following mental and physical symptoms which are the typical symptoms of extreme anxiety. These are:

The symptoms rapidly reach a peak of intensity within ten minutes of first appearing and then disappear as quickly as they arose. Although a panic attack can be extremely distressing, it is not physically harmful although the sufferer frequently believes that it is. Panic attacks are extremely common with about a third of people experiencing one in any given year.

Panic disorder is characterized by the occurrence of panic attacks which, at least in the first instance, arise unexpectedly and are not attached to a particular situation or stimulus. Anticipatory anxiety about the occurrence of further spontaneous attacks is a major part of the disorder. In many, but not all, cases the person avoids the place or situation where a panic attack occurred and this aspect has a strong correlation with agoraphobia.

The person also commonly believes that the panic attack is symptomatic of a serious physical disorder, such as a brain tumor or heart condition, and may report to a doctor or hospital on this basis. A diagnosis of panic disorder is unlikely to be made in these circumstances although it may emerge at a later date. The disorder itself is uncommon, affecting fewer than one in a hundred people in any given six-month period.